Note: this post is an extended abstract for the paper Complete Monitors for Gradual Types by Ben Greenman, Matthias Felleisen, and Christos Dimoulas. For the full paper, proofs, and slides, click here.

The program below has a subtle bug. Can you find it? 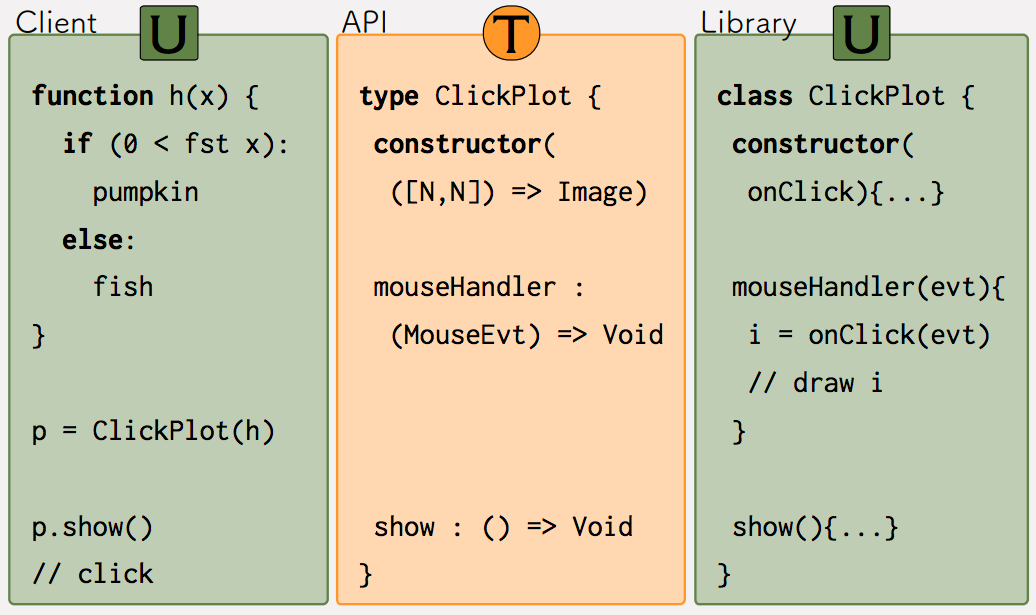 First of all, this pseudocode program combines three chunks of code:

The bug is in the API — in the type ([N, N]) => Image. This type promises that a given function can expect a pair of numbers, and indeed the client function h expects a pair. But the library code on the right sends a MouseEvt object.

What happens when we run this program in a type-sound mixed-typed language? Does h receive the invalid input?

As it turns out, type soundness cannot say. A type sound language may choose to enforce or ignore the fact that the API promises a pair of numbers to the client.

Type Soundness is Not Enough

Sound types are statements about the behavior of a program. A normal type soundness theorem for a typed language says that a well-typed program can either compute a value of the same type, compute forever (diverge), or stop with an acceptable error (perhaps division by zero). No other behaviors are possible.

If e : T then one of the following holds:

If e : T then one of the following holds:

And if e is untyped then one of the following holds:

Now we can see why mixed-typed soundness is not strong enough to guarantee that the callback h in the code above receives a pair value. We have an untyped function called from an untyped context — since there are no types sitting right there, type soundness has nothing to say except that the untyped code can expect an untyped value! 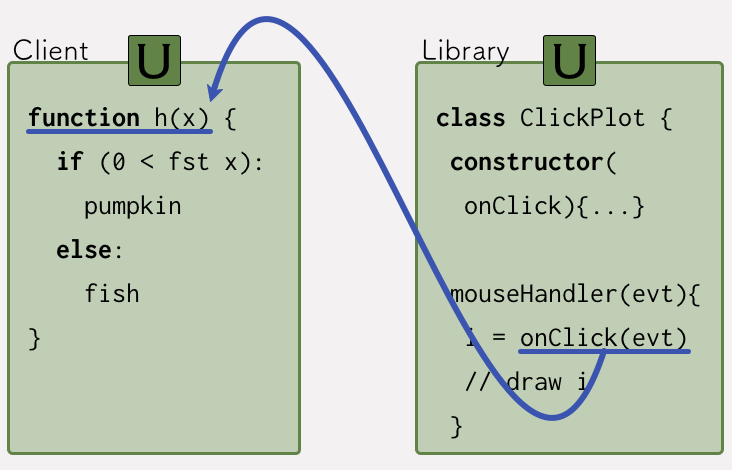 Nevertheless, this channel of communication between the library and client arose through the typed API. One might expect the type [N, N] to restrict the values that can flow across the channel; indeed, if types really are statements about the behavior of a program, then the channel needs to be protected.

The question is: what formal property separates languages thet check all typed/untyped channels of communication (whether direct or derived)? One answer is complete monitoring.

A mixed-typed language satisfies complete monitoring iff evaluation never lets a value flow un-checked across a type boundary. To make this idea precise, we need to enrich the syntax of the language with a specification of ownership to say what parts of the program are responsible for different values, and to say how evalution changes responsibilities. Relative to a specification, complete monitoring states that every expression that arises during evaluation is made up of parts that each have a single owner.

For all well-formed e and all e', if e -->* e' then every subexpression of e' has a unique owner.

This property separates our two behaviors for the Clickable Plot code. A language that satisfies complete monitoring enforces the API types with a runtime check. A language that merely satisfies type soundness may skip these checks.

An Aid to Debugging

The question raised by the Clickable Plot example is whether a language can detect one mismatch between a type and a value. A language that satisfies complete monitoring detects all such mis-matches. But we can say more. If a mismatch occurs, then programmer knows exactly where to start debugging — either the type is an incorrect specification, or the given value is flawed. In other words, complete monitoring implies a concise 2-party explanation for every type mismatch.

The paper generalizes this goal of explaining a mismatch for languages that fail to satisfy complete monitoring. There may be 2N parties to blame thanks to un-checked channels of communication, and we want to be certain to report all these parties and no false positives.

Also in the paper, you can find: