Visual and interactive-syntax is a type of language-oriented programming that allows developers to use, view, and edit portions of a textual program with graphics. Using interactive-syntax provides the benefits of a graphical programming language, while keeping all of the benefits of a purely textual language. For example, the following is an example of a small network embedded in a program: 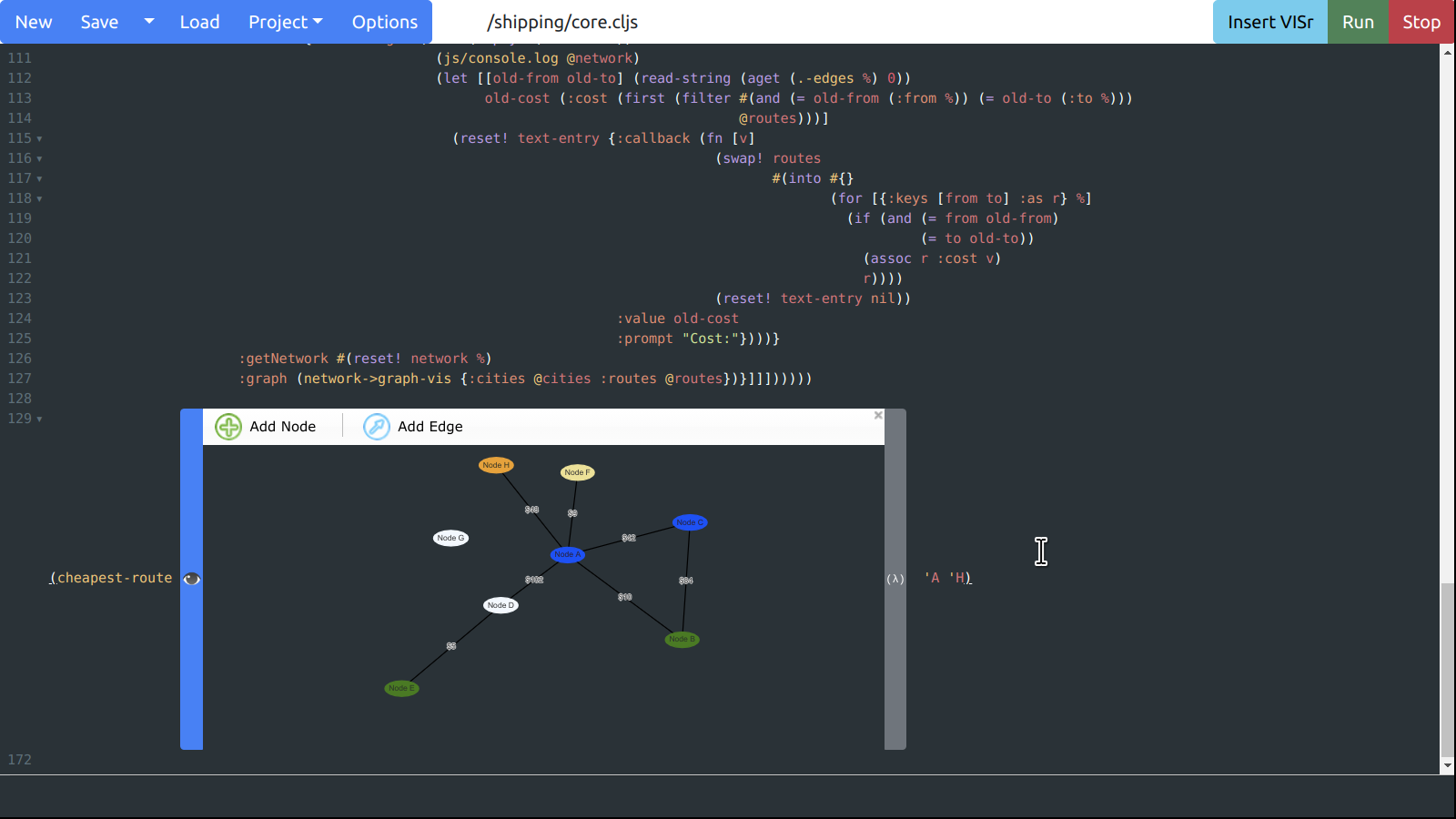 Interactive-syntax is backed by human readable code; the visual components exists purely when writing and editing code. This backing means all of the tools involved in software development work with interactive-syntax extensions. For example:

To learn more about interactive-syntax, watch this video or read the accompanying paper.

This article is a brief introduction to both the VISr environment and the components that make up a VISrs. It discusses how to insert a VISr into code, how to manipulate a VISr, and how to create a new types of VISr. Future articles will discuss more advanced uses such as integrating NPM packages and using VISrs in other languages.

Start by going to visr.pl, which is a web-based IDE that directly supports VISrs. Once in the IDE, press Insert VISr to place a VISr at the current cursor position. This VISr contains two buttons:

Opening the code shows that the new VISr is an instance of visr.core/empty-visr, a default VISr provided by the IDE. This VISr expects a map with the key :message to display in the visual view. Changing the value associated with :message changes what is displayed, in this case “Endless Possibility”:

Remember that, although this VISr is displayed graphically, it still exists as human-readable text. One way to see this text is by copying and pasting the VISr. A copy of the same VISr will appear when it is placed back into the IDE. However, pasting it into other text editors that do not natively support VISrs yields the following human readable, and editable, text:

This operation works in reverse too. Writing out similar text and pasting it into visr.pl yields its visual representation.

The following is the signature for a simple VISr type:

This example uses elaborate-fn, a simplified version of elaborate that gives the VISr the same semantics as a function application. It also allows the defvisr form to work in the same file as the VISr itself. 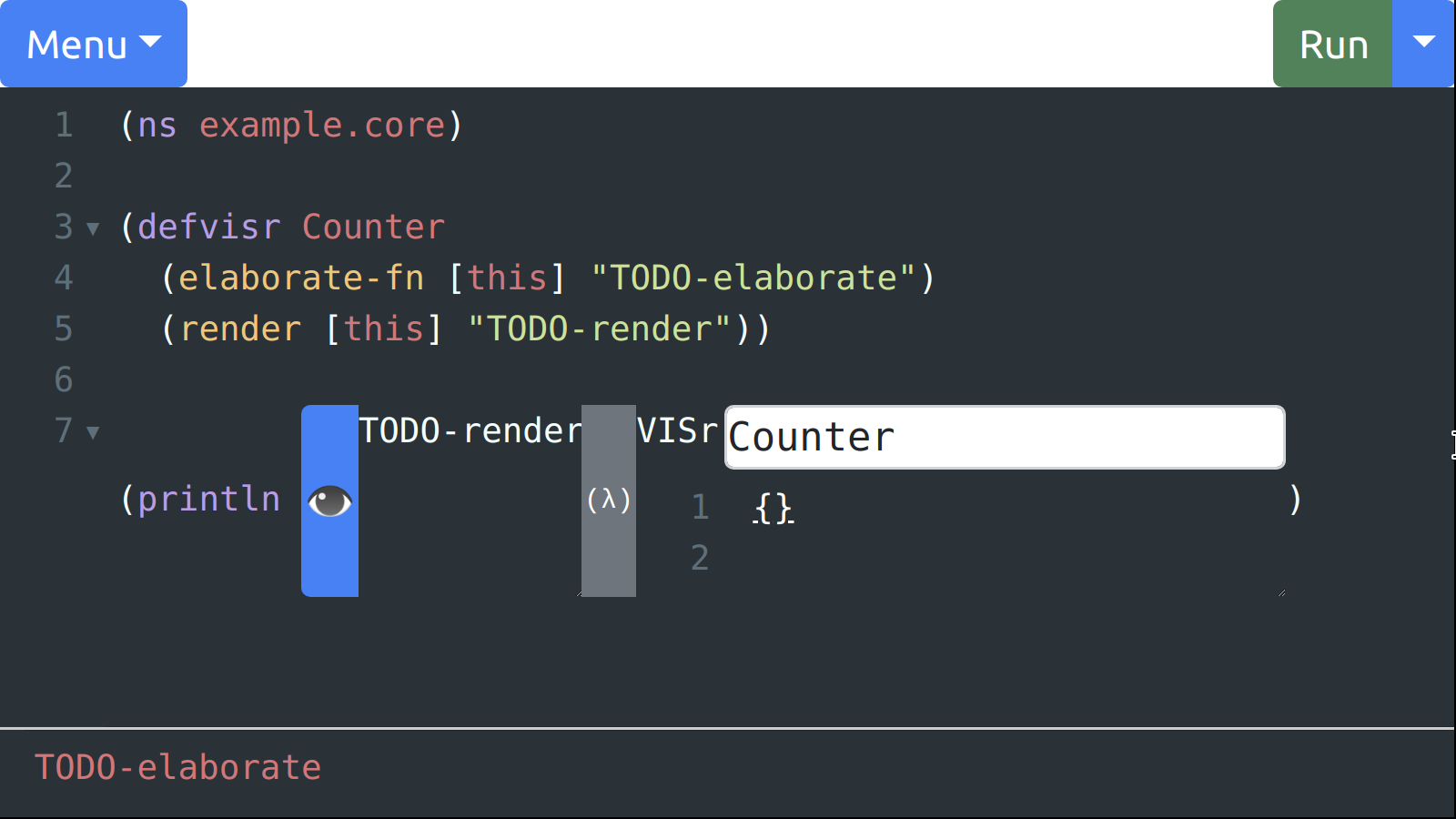 The Render Method for Edit-Time Semantics

The render method is given the VISr state as an atom; updating this atom also updates the code to reflect the new state. The return value for render must be a Reagent form that is the visual view for the VISr. A render method for a counter VISr might look as follows: 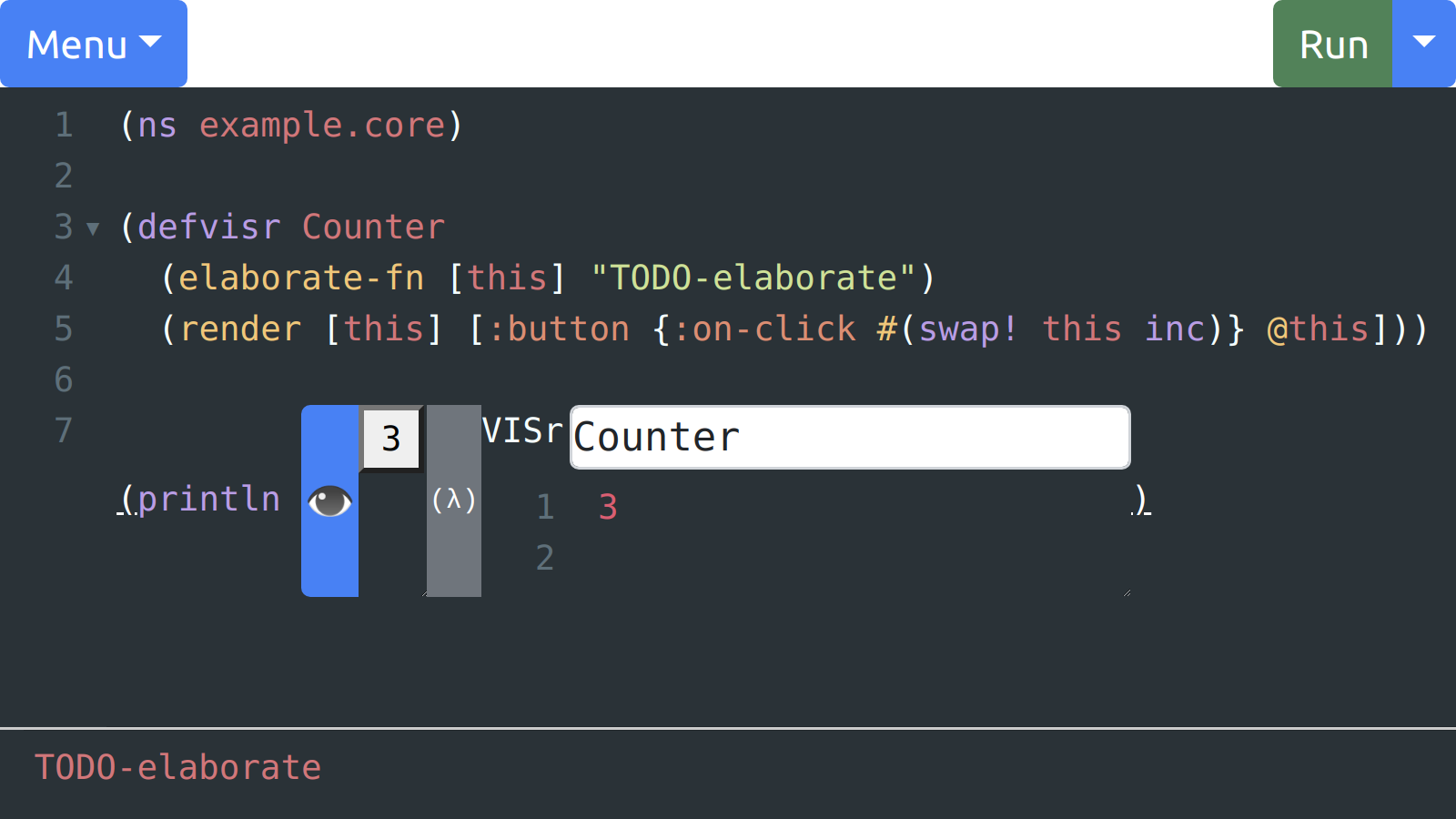 This VISr doesn’t match the theme of the page; it also requires the state to be a single number. Using React Bootstrap and Reagent cursors fixes both of these issues:

The elaborate method takes the VISr state, and is expected to provide a compile-time or run-time semantics. In the simplified case of elaborate-fn, the VISr semantics takes the form of a function application:

This elaborate method expects a dictionary with the key :count and returns the value associated with that key. It makes use of ClojureScript’s Destructuring for brevity. The following code is equivalent:

Putting it all together

The final result is:

Here is the VISr in action: 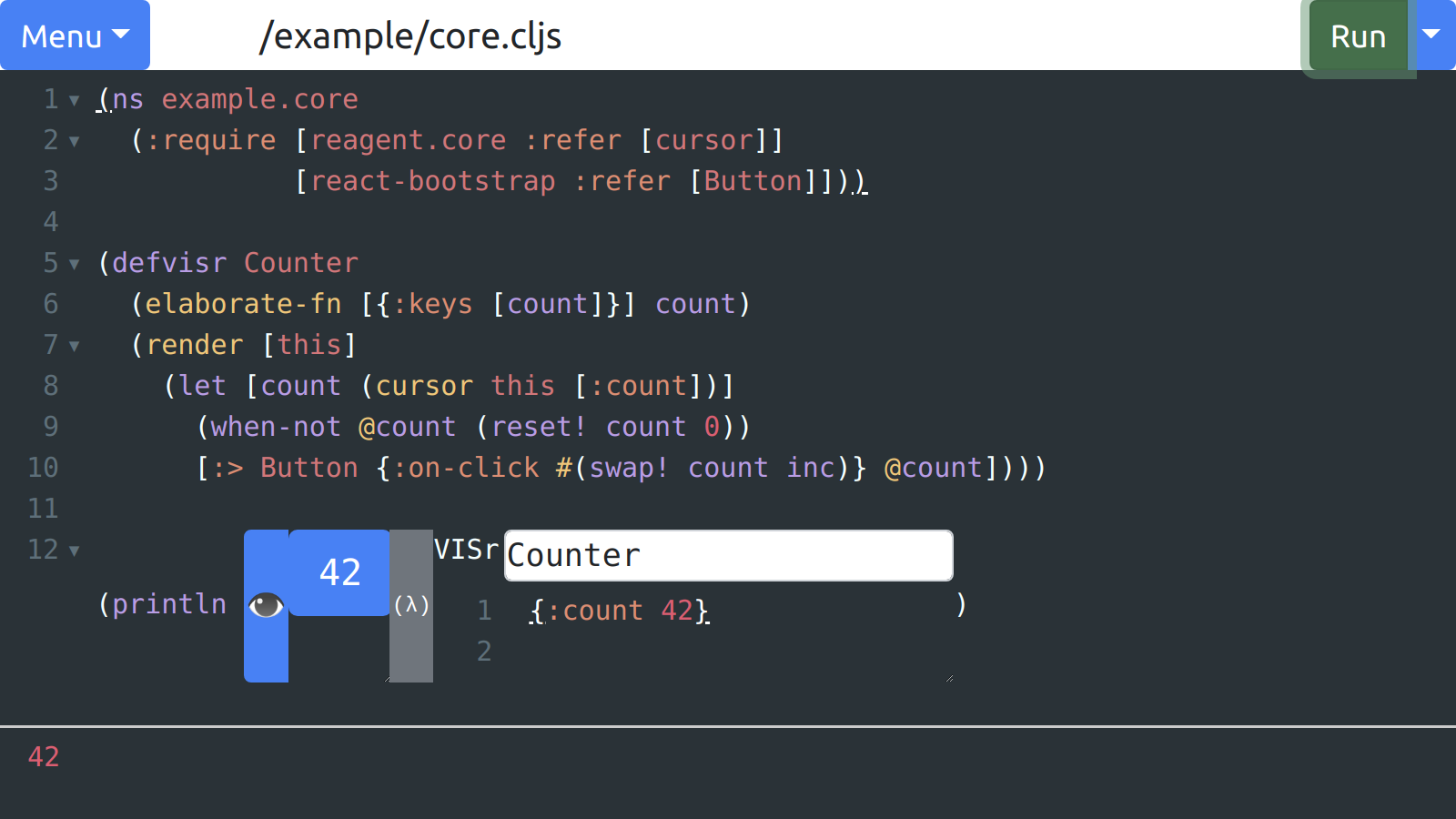 That’s all there is to it. From here, you can go to visr.pl to make your own programs using VISr. You can also take this survey, which contains more advanced example uses for VISr. If you find any bugs or want to contribute, you can also head to the visr project page.

Thanks for reading, happy coding!